South Africa: Water and Sanitation on dam levels in the country 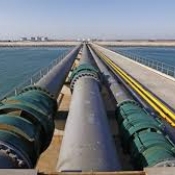 South Africa: Water and Sanitation on dam levels in the country

With a mere three months before the first summer rains start coming down, South Africa’s dams look fairly stable at 69% and they are likely to sustain the country until then.

The latest weekly report by the Department of Water and Sanitation shows that South Africans have largely heeded a call by Minister Lindiwe Sisulu to save water during the dry winter season. The outbreak of Covid-19 in March sparked fears that it might put a tremendous strain on water availability following a government call for everyone to wash their hands with water and soap regularly.

Free State, which is home to some of the country’s biggest dams, leads the pack with an average 81,2% dam levels. Gauteng which has fewer dams recorded 99,4% dam levels, followed by Northern Cape at 91,4%. The Vaal Dam, which is part of the Integrated Vaal River Systems (IVRS) supplying South Africa’s economic hub in Gauteng, is hurtling downwards and is currently at 43,4%.

So far Eastern Cape is also teetering at 51,5%, a figure that reflects almost half the dam levels compared to the rest of the country. In 2019 vast parts of the province were afflicted by severe drought spells which prompted the Provincial Government to declare it a disaster area.

Areas such as Nelson Mandela Bay, Amathole and Buffalo City are struggling to recover with water supply systems supplying water to those areas declining consistently.

Although Limpopo dam levels were recorded at 64,6%, there are concerns around the citrus industry in Mopani District whose main dams, Tzaneen and Middel-Letaba, remain at 16,3% and 2,2% respectively. Hydrologically, no abstraction may take place from Middel-Letaba Dam which supplies Giyani and its outlying villages.

On the other hand, Western Cape farmers are smiling all the way to the bank following a bumper rainy season that started at the beginning of June. As a result, large parts of the Cape Peninsula were flooded and hundreds of township shack dwellers were displaced. Heavy rains in the province are expected until November when the region enters its summer dry season.

Mpumalanga lies in the middle of the table with a 71,6% dam level that was recorded at the beginning of the week. Most of the province’s rivers in the Highveld of Emalahleni and Lowveld in Kruger National flowing above 50%. Drioekoppies and Maguga dam on the borders of Mozambique and Swaziland respectively recorded 73,7% and 74,8%. Inyaka Dam that supplies large parts of Bushbuckridge recorded 54%

Midmar Dam in Natal-Midlands of KwaZulu-Natal boosted the province’s dam levels at 97,1% while the Driel Barrage which receives its water from Tugela River is almost full at 98,7%. The province recorded 59,8% North West is stable at 69,8% with most of its dams flowing above 50%.

The Department of Water and Sanitation would like to reiterate its call for water users to continue using water sparingly so that we have enough water to see us through to the next rainy season. 2

For media releases, speeches and news