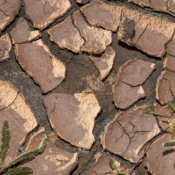 JOHANNESBURG (AP) — South Africa's government is announcing water restrictions as reservoir levels drop and rainfall is not expected until December.

South Africa's government says the country is one of the world's 30 driest nations. The city of Cape Town early last year faced the prospect of "Day Zero," or the date when most taps would have to be cut off because of a long drought.

Sisulu says more than 60% of the country's water supplies go to agriculture, leaving only 27% for its population of over 58 million people. She has said that aging water infrastructure and mismanagement pose a challenge.