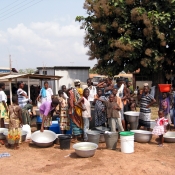 The book demostrate that failure to integrate climate change in the planing and design of power and water infrastructure could entail, in the driest scenarios, significant losses of hydropower revenus and increases in consumer expenditure for energy. In the wettest cliamte scenarios, business-as-usual infrastructure development could lead to substantial forgone revenues if larger volume of precipitation is not used to expand the production of hydropower.