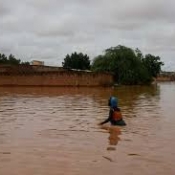 Flooding affects more people than any other environmental hazard and hinders sustainable development1,2. Investing in flood adaptation strategies may reduce the loss of life and livelihood caused by floods3. Where and how floods occur and who is exposed are changing as a result of rapid urbanization4, flood mitigation infrastructure5 and increasing settlements in floodplains6. Previous estimates of the global flood-exposed population have been limited by a lack of observational data, relying instead on models, which have high uncertainty3,7,8,9,10,11. Here we use daily satellite imagery at 250-metre resolution to estimate flood extent and population exposure for 913 large flood events from 2000 to 2018. We determine a total inundation area of 2.23 million square kilometres, with 255–290 million people directly affected by floods. We estimate that the total population in locations with satellite-observed inundation grew by 58–86 million from 2000 to 2015. This represents an increase of 20 to 24 per cent in the proportion of the global population exposed to floods, ten times higher than previous estimates7. Climate change projections for 2030 indicate that the proportion of the population exposed to floods will increase further. The high spatial and temporal resolution of the satellite observations will improve our understanding of where floods are changing and how best to adapt. The global flood database generated from these observations will help to improve vulnerability assessments, the accuracy of global and local flood models, the efficacy of adaptation interventions and our understanding of the interactions between landcover change, climate and floods.