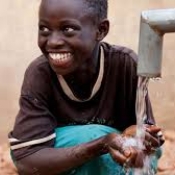 The Biden-Harris Administration recognizes the critical role of sustainable water systems and the transformational power that water access has in the life of each person on earth. From its most basic role as the source of life to its advanced role in powering global economies, water matters. Still, its ubiquity in everyday life risks leading us to take it for granted — while global trends in population growth, urbanization, environmental degradation, deforestation, and climate change pose growing challenges to water security around the world. Here at home, water crises are becoming more frequent and intense. Historic droughts threaten our supply of water, and failing infrastructure and chronic underinvestment deprive our most vulnerable communities of safe drinking water. Lack of sanitation threatens public health, individual safety and dignity, equity, and the protection of freshwater resources; extreme weather events intensify these risks where improved sanitation is unavailable. As the source of both life and livelihoods, water security is central to human and national security.

Domestically, the Administration is tackling a spectrum of water security challenges. Through the Bipartisan Infrastructure Law, historic investments are being made to replace lead pipes and deliver safe drinking water to families and children. From rural towns to struggling cities, the legislation will invest in water infrastructure, including in Tribal Nations and overburdened and underserved communities that need it most. That includes billions of dollars in funding for projects across the country to build new water reuse, efficiency, storage, and conveyance facilities that secure and grow our water supplies. Moreover, through the Justice40 Initiative,1 agencies are aiming to direct 40 percent of the overall benefits from investments in critical clean water infrastructure to disadvantaged communities.

Millions of Americans feel the effects of climate change each year when their roads wash out, schools and businesses flood, or power goes down due to extreme weather and climate-related disasters. The Bipartisan Infrastructure Law repairs and rebuilds our Nation’s infrastructure — with a focus on climate change mitigation, resilience, equity, and safety. This legislation represents the largest investment in the resilience of physical and natural systems in American history. The Administration has also committed to conserving 30 percent of U.S. lands and waters by 2030, which will help promote resilience and conserve important watersheds. In addition, at the executive level, President Biden’s National Climate Task Force has launched multiple interagency working groups to build resilience across the country — including the Drought Resilience Interagency Working Group.

These efforts at home bolster longstanding U.S. Government contributions and leadership internationally on water security (including sanitation and hygiene). As the world becomes increasingly water insecure, the significance of water security in U.S. foreign policy and national security goals is coming into sharper focus. The 2021 U.S. Intelligence Community’s National Intelligence Estimate on Climate Change highlights both the increasing stress on global water resources and the resulting implications for U.S. national security, which include worsening inequality, increasing economic strain, negative health and health security outcomes, and a growing likelihood that water insecurity will become a driver or trigger of instability and subsequent conflict.

Recognizing that global water security is essential to U.S. national security, this Action Plan lays out an innovative, whole-of-government approach to this challenge. It identifies key pillars of this approach that address the full scope of global water issues and will mobilize departments and agencies around concrete actions to achieve our vision of a water-secure world. The Action Plan will be operationalized through the U.S. Global Water Strategy (GWS), mandated by the Congress in the Senator Paul Simon Water for the World Act of 2014; the next revision of the GWS will be submitted to the Congress in early fall 2022 as directed. The approach emphasizes the need to explicitly link water security to national security to improve global resilience; elevate data-driven methods; use resources more efficiently; and work in partnership with states, Tribes, local governments, and Indigenous peoples, as well as non-governmental entities including the private sector.