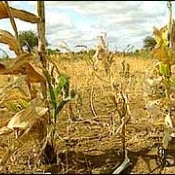 rom ARNOLD MULENGA in Lusaka, Zambia
LUSAKA, (CAJ News) –MAJOR health, protection and education crises are unfolding in the southern and western parts of Zambia that are bearing the brunt of a prolonged drought battering the country

The country of some 17 million people is grappling with protracted drought as a consequence of significant rainfall deficit in the November-March season.

Effects are noticeable in the Southern and Western provinces where agricultural production has declined.

Consequently, households are sharply depleting food stocks and are increasingly dependent on market purchases, driving up the prices of staple foods such as the staple maize.

They constitute a significant portion of the total 1,172 million people estimated in need of similar assistance around the entire Southern African nation.

This represents a negative change of fortunes in a country that has in recent years been an exporter of grain to neighbouring countries enduring successive droughts.

An assessment by the National Vulnerability Assessment Committees of Southern African Development Community (SADC) Member States, indicates Zambia has the most significant increase in food insecurity compared to last year, with a 144 percent increase.

In Choma, the capital city of Southern Province, the price for white maize have more than doubled to ZK3 (or US$0,24)/ kilogramme.

Kalomo, Gwembe Siavonga and Sinazongwe are among other areas worst impacted by the drought.

It is more than ZK1,25/kg higher than the five-year average, according to the Famine Early Warning Systems Network (FEWS NET), a provider of information and analysis on food insecurity.

With a decline in food and water availability is noticeable, humanitarian organisations fear the situation degenerating into multiple crises around education, gender and health.

The World Health Organisation (WHO), people who are facing severe food insecurity, malnutrition, and poor access to clean water and sanitation are at particular risk of diarrhoeal and communicable diseases.

It is feared the schooling of children might be at risk, as the youngsters’ attendance could decline due to decreased household resources paying for school fees and school material, hunger and children looking for alternative livelihood strategies to help their families.

Forced absences from school, related to seasonal migrations to ensure access to water, have especially been observed in Sinazongwe district, one of the worst drought-affected districts in Southern Province of Zambia.

The Assessment Capacities Project (ACAPS) noted due to a lack of water sources, people were obliged to look for resources further from their houses thus increasing protection concerns for women and children who might be exposed to sex and gender-based violence.

Women have reported travelling in groups in search of water, so as to minimise risks.

“Traveling on one’s own is dangerous. You never know who might be lurking in the bushes to take advantage of women and children walking long distances to fetch water and firewood,” said Luwi Makasa, woman in Siavonga.

Last month, the Zambia Conference of Catholic Bishops called on the government to declare a hunger crisis in drought-affected areas in the southern and western regions.

However, Vice President, Inonge Wina, told legislators that the country had adequate grain.

“The Disaster Management and Mitigation Unit is already distributing relief food in affected districts,” she said.