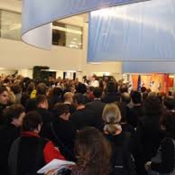 The Environment Directorate-General of the European Commission is organising the 4th European Water Conference, which will be held in Brussels on 23-24 March 2015, the day after World Water Day. On this occasion, representatives from Member States, stakeholders and the European Commission will have the opportunity to debate about the following key topics:

The 4th European Water Conference targets approximately 400 participants balanced across sectors and Member States.  Participation is based on invitation only.  The Conference is aimed primarily at those working directly or indirectly on the implementation of the Water Framework and Floods Directives at national, regional or local level, including stakeholders with a legitimate interest in water policy.  Interested delegates can pre-register via this website.  Pre-registration starts on 15 December and closes on 6 March 2015.  Please note that pre-registration does not guarantee participation. If your registration has been accepted, you will receive an invitation by email at the latest 2 weeks after pre-registration.

Simultaneous interpretation will be provided in the following languages: English, German, French, Italian and Spanish.

A draft Conference programme is available and will be regularly updated in the coming weeks.

More information is available via ENV-WATER@ec.europa.eu.

The Water Framework Directive (WFD) adopted in 2000 put forward an integrated approach for EU water policy, centred on the concept of river basin management with the objective of achieving good status of all EU waters by 2015. The main tools to implement the Directive are the River Basin Management Plans and the Programmes of Measures. The first River Basin Management Plans and Programmes of Measures, adopted in 2009, are being updated and will be subject to public consultation during the first half of 2015 before their final adoption by the end of 2015.

The Floods Directive (FD) of 2007 aims to reduce and manage the risks that floods pose to human health, the environment, cultural heritage and economic activity. By 2015 flood risk management plans must be drawn up for areas identified to be at risk.  Unlike the WFD, the Floods Directive does not have a precise calendar of public consultation, but many Member States will consult on the WFD and Flood Plans at the same time, during the first semester of 2015.