Annex 6-8 (SC): The ZAMBEZI Guidelines in modelling hydrology and hydropower based on case studies 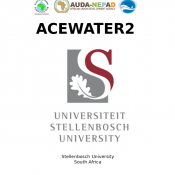 The Zambezi as a shared water resource in SADC presented numerous sensitive issues related to data availability and data sharing. The data needed included climate, flow, agricultural water use, groundwater hydrology and use, water quality and all the flow information. The Zambezi is also used for power generation and this impact on flow.
The information base also included remotely sensed information, soils maps, landuse and the geomorphology of the total Zambezi catchment.
The project also looked at access to existing models and their applicability as management models, with the man aim to also be usable in terms of dam level responses related to power generation.
Three groups were found that developed models for the Zambezi Catchment. The first was a group at TU Delft, the second a group from Switzerland, and the last, a group from South Africa.. The first two used SWAT modelling and the last used the South African Pitman model, also known as SPATSIM. SPATSIM was made available to group and the group was trained to use SPATSIM
The SPATSIM (and Pitman) model is used by the South African water authorities as a water planning model. The model is based on flow measurements and response curves and mainly driven by distributed rainfall data.
SPATSIM was found to be a good model to use for the Zambezi Catchment and ultimate aim is to include SPATSIM in the ZAMCOM database system to be utilized for future water planning. This model was also easier to set up, making use of CRU climate data and all the flow data for the catchment.
- Annex 6: De Clercq W., 2020. HHD.1 Inception report. ACEWATER2 report JRC122709 (Component of deliverable)
- Annex 7: De Clercq W. And De Witt M., 2020. The Zambezi: guidelines in modelling hydrology and hydropower based on case studies. ACEWATER2 report JRC122709 (Main deliverable)
- Annex 8: De Clercq W., 2020. The Zambezi: guidelines in modelling hydrology and hydropower based on case studies. Addendum A: a map database on the Aquaknow platform to support hydrological modelling. ACEWATER2 report JRC122709 (Component of deliverable)
Document Files: