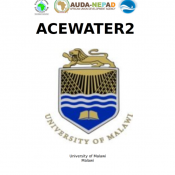 The Zambezi River Basin (ZRB) is among the key water resources of Southern Africa. It

million people. This rapid population growth is coupled with other pressures such as
climate change and variability. The water resources of the ZRB are therefore increasingly
being stressed due to concerted efforts by the riparian to carter for the needs of the large
population against the pressures. Irrigation expansion is an alternative water using
activity that is likely to result in additional pressure to the ZRB’s water resources.
Presently, the ZRB has an estimated total irrigation potential of over 30 thousand km2, of
which only 5% is being utilized. This study was aimed at evaluating the irrigation
potential of some of the key sub-basins in the ZRB, against crop water requirements
(CWR). The study applied CropWat 8.0 program by FAO with climate and rainfall data
files obtained from CLIMWAT, the FAO’s climate database. Three stations in each of four
riparian countries were selected namely: Makhanga, Ngabu and Thyolo in Malawi;
Mutarara, Caia and Mopeta in Mozambique; Kasempa, Kwekwe and Kaoma in Zambia;
and Gweru, Kabwe, and Maranella in Zimbabwe. Major crops considered were maize,
rice, wheat and sugarcane. Based on the modelled results, CWR for the same crop are
different, largely influenced by the climatic input. The study found that although there
are eight riparian countries in the Zambezi River Basin, their potential contribution in
terms of irrigated agriculture is different; with Mozambique, Zambia, Zimbabwe and
Malawi being among the countries with a significantly large potential for irrigation.