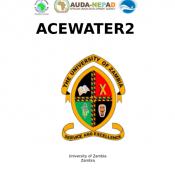 The project is aimed at generating data on groundwater hydrology and aquifer pollution at country scale for Zambia to support WEFE nexus analysis in the Zambezi Basin.

The work addresses the following topics:
- Identifying important aquifers in Zambia, both in terms of productivity and demand;
- Prioritizing the target areas in which these aquifers are situated according to their current and potential future use considering;
a) Urbanization and associated increasing demands and effects on both groundwater quantity and quality, with a particular focus on the impact of the lack of adequate sanitation and related health risks;
b) Agricultural development and the potentially growing importance of groundwater as a source of irrigation water;
c) Industrial growth, including mining activities, with potential impacts on groundwater quality;
d) Potential conflicts between different user groups competing for water resources in relation WEFE nexus issues;
e) Providing annexed raw data (geology/hydrogeology, aquifer types and productivity, piezometric heads and contamination data, groundwater use by sector) to support the wider ZRB assignment.

This work is defined within the project, “The African Networks of Centres of Excellence on Water Sciences PHASE II (ACE WATER 2)” focusing on an overall WEFE (Water-Energy-Food-Ecosystem) nexus assessment over the Zambezi River Basin (ZRB). The project,
whose geographical scope extends over most of the sub-Saharan Africa focusing on three distinct and complementary networks in Western, Central-Eastern and Southern Africa, is run under the coordination of the Joint Research Centre of the European Commission (JRC/EC), responsible for the scientific research, in collaboration with UNESCO in charge of the HCD (Human Capacity Development) component. Leading scientific experts from ten Southern Africa Centers of Excellence (CoEs, geographically spanning through South Africa, Botswana, Namibia, Zimbabwe, Zambia, Malawi and Mozambique), as well as from the Un. of Rhodes and the Un. of Florida, collaborated at different extent to such a challenge joint effort, addressing different topics as; the climate variability and climate change; the surface
hydrology; the groundwater hydrology; the hydropower and the agriculture current status and future developments under the various constraining factors, as water availability reduction and increasing pressure due to population growth and activities development. Key regional and basin management Institutions, as the SADC (Southern Africa Development Community), SADC-GMI (SADC-Groundwater Management Institute) and ZAMCOM (ZAMbezi water course COMmission) supported the activities, providing guidance with respect to key policies and access to relevant datasets.  As for the groundwater hydrology, the University of Western Cape (Mengistu, 2018) compiled
an updated geological and hydrogeological map complementing the work from the University of Zambia (Banda, 2018) and the NUST of Zimbabwe (Chinyama and Makaya, 2018), who focused on the compilation of detailed databases and the analysis of the hydrogeological and hydro-chemical status at respective country scale (Zambia and Zimbabwe respectively). The analysis implemented in the framework of the ACEWATER2 project contributed to identify: (i) areas relevant to groundwater use, as inferred from wells spatial distribution, characteristics (e.g. yield, hydrogeological properties estimate after pumping tests, water sampling and water quality analysis) and any further evidence of groundwater withdrawal, for human supply (e.g. from population density), irrigation in agriculture (e.g. pivoting systems), cooling of industrial plants and water use in mining activities; (2) groundwater accessibility, as related to wells and
water table depth (from the ground), and future potential, relevant to expected socio-economic development (e.g. growing population, expanding irrigated agriculture); (2) few groundwater vulnerability issues, as due to contamination from surficial or deep origin sources (e.g. fertilizers and pesticides in agriculture, fecal choliforms from untreated water, leakage from landfills, upconing of salinized water trapped in deep aquifers, as in western Zambezi, or salt water intrusion along coastal areas). Very few quantitative studies and datasets at the basin scale exist, among which include: the SADC hydrogeological map and atlas, SADC HGM (Pietersen et al., 2010), the groundwater
hydrology and hydrochemistry database from the SADC-GMI, continent quantitative hydrogeological maps of Africa from the BGS (MacDonald et al., 2012) and global coverage of potential recharge estimates calculated using WaterGap Model from BGR (Doell and Fiedler
2008). This work focuses on a further specific analysis that was undertaken to investigate the 8 potentials and the bottlenecks in the application of groundwater flow modelling at the basin scale, with the following objectives, (i). to investigate the reliability of hydrogeological parameters estimates and the groundwater resources availability; (ii). to support the assessment of interlinks between the surface water bodies and the aquifer systems. Given the areal extent, the Zambezi river basin being the fourth largest one in Africa after Nile, Niger and Congo, and its geological/tectonic complexity, the OS (Open Source) state-of-the-art USGS codes MODFLOW and MODPATH (Pollock, 2012) were considered not the most suitable platform, due to the limited discretization flexibility of the finite difference scheme. Instead, the DHI-WASY finite element code and modelling environment (Diersch, 2009) was adopted; thanks to the finite element numerical formulation, the high flexibility of triangular meshing makes possible to capture the relevant features (e.g. drainage network, geological and tectonic limits), while adopting a rough resolution over more remote and unknown areas.